Solutions To Ending Your Blossom-End-Rot

Solutions To Ending Your Blossom-End-Rot

Tomatoes developing an opaque, firm section on the bottom of the fruit happens to be called blossom-end-rot on your tomato fruit. Blossom end rot is primarily environmental and not always anything the planter grower’s fault. A lack of calcium in the soil can sometimes contribute, but if the tomato’s foliage is thriving in color and if using a quality organic fertilizer this factor can probably rule out. The real cause is somewhat mysterious, a combination of environmental and genetic factors. But the condition seems to be exacerbated by either extremes in soil moisture or inconsistent soil moisture, which puts the plants in some degree of daily stress, contributing to blossom end rot.

The good news is that the phenomenon is generally short lived. When it does happen, it is the first set of fruit that is usually affected. Later fruit are generally unaffected and normal. The other good news is that, other than the terrible looking dark, hard section on the bottom of the fruit, if you just cut that portion away, it is perfectly fine to eat. Since it is not a fungus, bacteria or other disease (it is environmental) there is no risk of it spreading to or harming other plants or harming anyone eating the fruit.

Regarding drooping foliage, suspect to see a fairly normal situation for tomatoes over the next few months. It is not at all unusual for a big, lush tomato to look great in spring, then more stressed as the weather warms and the fruit begin to ripen. In fact, this is the normal routine. Tomato droopy during hot afternoons, especially now that the days are longer and hotter this time of the year. The foliage will generally bounce back up in the late evening and in the morning look plump again, but by mid-day, no matter how well watered, the plant droops a bit again. It is just the nature of hot weather and tomatoes – the plant is losing moisture to the air faster than it can bring water up from the roots and a sort of short-term wilt occurs. Splashing the foliage & the surrounding area briefly will help, but for the most part there is not much can be done. 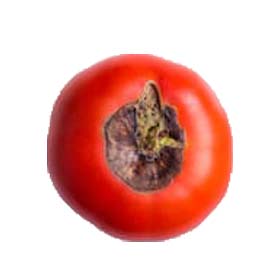